It’s all about the timing… 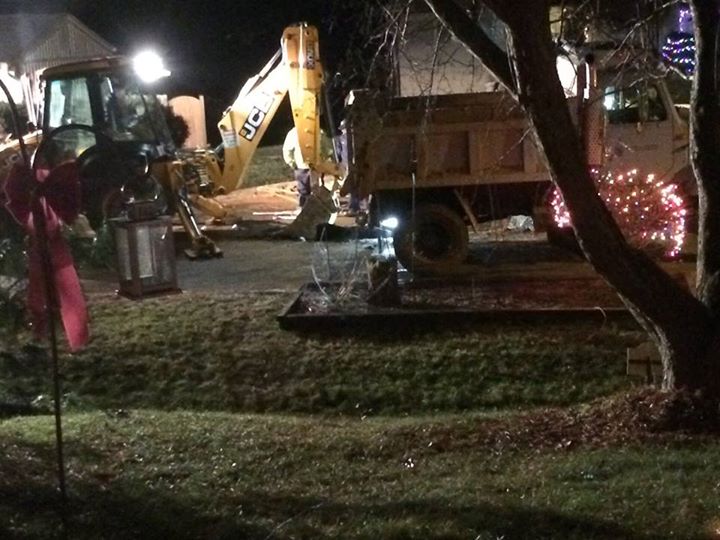 Yesterday morning, we noticed that there were some WSSC (water/sewer) trucks parked along the street in front of our house. It was my day off, so I had a list of chores and errands I planned on doing before a predicted “dusting” of snow started. (Note: that “dusting” turned into 6 inches. Here in the Mid-Atlantic where streets are plowed and treated only after the traffic has nicely packed the snowfall into an icy mess. But I digress…)

Four hours later… I checked in with the team and the initial trench was doubled and then tripled in size because the water main cracked in two additional places while they were digging. Oh – and all of our homes’ water mains had been pulled out of the water main as well. So they had to fix that. I offered them hot beverages and maybe a bathroom break, but he declined, saying that they were doing fine.

Six hours later… they were bringing in a second shift of workers and more jackhammers and trucks. The foreman apologized and said he “hoped” the water would be on by morning. The street was a muddy, muddy mess.

Twelve hours later… they were still jack hammering. I put in my ear plugs and went to bed. Snow was coming (“just a dusting” HA!) and I had work in the morning. I felt sorry for the workers – it was cold and getting colder!

When I first heard the water was going to be off, I did my usual gig – grabbed buckets, filled them and left them by each toilet, and filled a couple of pitchers at the kitchen sink. A couple of hours? no problem. Many more hours? Uh… that could be a problem! Time for a Plan C, D, or E. On his way home, my husband picked up Chinese food and we dined on gourmet paper plates.

As I watched the men work and did some cleaning up of Christmas decorations, I was struck by the timing… Just a few days ago, we had a houseful of folks, deadlines and timelines to meet, and all kinds of laundry, dishes and baking going on. Having a water main shut down then would have been a serious pain.

It’s all about the timing…  and I’m counting my blessings!