The news from Ferguson, Missouri touches a nerve. More than ever, I am aware of the ways in which my family of origin has shaped my human experience. I am blessed and privileged. To say anything less, or to make assumptions that I “understand” is both presumptuous and (dare I say it?) sinful.

As a chaplain, I have had several encounters in the hospital ER that remind me how fragile human life really is. Car accidents. Heart attacks. Drug overdose. Suicide attempts. Gun violence. Those are the extreme, headline-grabbing type of incidents.

Then there are the more commonplace that occur due to lack of access or engagement with the health system, or perhaps denial on the part of the patient. Raging infections. Impacted bowels. Cancer in advanced stages. Psychiatric illness. Neglect and abuse.

Each encounter backlit a problem that is systemic in our culture. Each incident caused a sudden weaving of a stranger’s life into my own. Over and over I heard the phrase, “Why is this happening to me?” I noted an unjust indictment against God: “If God is a loving God, why….?”

I can’t answer for God. Truthfully, there are days I do not really understand how God is working in the world. I walk on with faith and hope that the God I worship does care, does see each life as having value and does an overarching plan for the Universe. 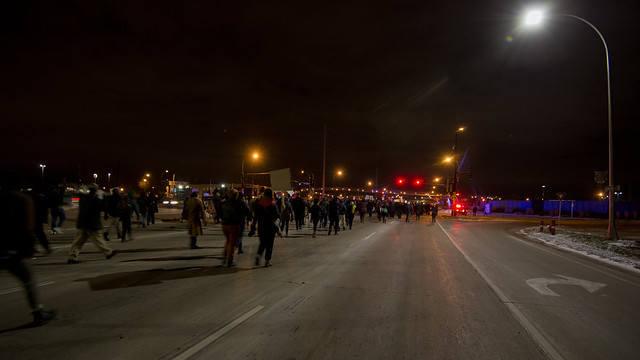 When I read about the uproar in Ferguson, I am frustrated. I am angry. I feel powerless (and I am among the faces and races that have the socioeconomic power). Most of all, I grieve. I know that I do not really understand “what it feels like.” I remember that I have not experienced the pain, the prejudice, the anger, the wall of silence.

I remember sitting with a family member once, the matriarch of the family, waiting with her as the police detective interviewed her and then accompanying her to see her young son’s body. He had been shot in the heart at close range and was dead on arrival to the Trauma Center.

Her pain was visceral. Her family’s loss was palpable. The detective, the admissions clerk, the charge nurse all responded with efficiency, and I think they were sad that it happened. But the never-ending workload caused them to briskly move to their next tasks. It must have felt like no one cared. She turned the full force of her anger on me… and I had to agree with her that things were not going to be “OK.” In fact, I told her, they never would be.

Acknowledging her pain and my privilege didn’t fix things. But it did give us the space to move on, together, with a deeper awareness on my part that I understood far too little.

This lesson from Ferguson doesn’t sink in easily. It isn’t comfortable. It drives conversation into depths that define one’s understanding of the abuse of power, lines of communication and the reality of racial prejudice. If we are going to learn anything trom Ferguson, Missouri, it is simply this:

We must walk through this together. And with God’s help.

That night in the ER, the grieving mother and I began that journey. We sat together, letting the tears come and go. Softly and with wavering voices, we sang a hymn. It has become my anthem to accompany sorrow, fear and the big Unknown.

I do not understand fully but that does not stop me from listening, from grieving, and from praying for change. Not One More Life lost to gun violence.

Lead me on, let me stand,

Lead me on through the night…