Have you ever been in a place where you needed a fresh start? Maybe wanted to get a whole new identity and start over?

During my last semester in seminary, we were required to attend a Spiritual Formation class that included a short retreat with our classmates and professor. My prayer partner and I arrived on campus exhausted and ready for a break. She was in the throes of denominational schism and conflict, her application for ordination in the netherlands of bureaucracy. I was in a difficult ministry setting and was ready to quit ministry completely.

One morning at the retreat center, I headed out with my camera. It was quiet and crystal clear. I wrestled with my doubts.
Why was I in seminary?
Why was every door of opportunity being slammed shut?
Why wasn’t I drawn to the typical “women’s ministry” or “children’s ministry” positions? (It’s not that I don’t think women should NOT fulfill those roles — they just weren’t for me.)
And why, above all, were the alternatives not clear?

I was silent. I watched. I looked. I prayed. And took pictures. Several photos later the images spoke volumes to me. It was as if God said, “Do not fear the opposition. Do not assume that conflict means you are in the wrong. I will make a way. I have a place for you.”

The beauty of this week’s passage is rooted in a theme of recovery and restoration. The Jewish people had been restored to their Land. Weary and wounded, they wanted assurance that God had heard their prayers for relief.

And God, the Faithful One, had responded. In this passage, in the context of the post-exilic era, God makes several precious promises to the people. And they are for the Church today, too!

Hear the Word of the Lord from Isaiah 62

1 For Zion’s sake I won’t keep silent,
and for Jerusalem’s sake I won’t sit still
until her righteousness shines out like a light,
and her salvation blazes like a torch.
2 Nations will see your righteousness,
all kings your glory.
You will be called by a new name,
which the Lord’s own mouth will determine.
3 You will be a splendid garland in the Lord’s hand,
a royal turban in the palm of God’s hand.
4 You will no longer be called Abandoned,
and your land will no longer be called Deserted.
Instead, you will be called My Delight Is in Her,
and your land, Married.
Because the Lord delights in you,
your land will be cared for once again.
5 As a young man marries a young woman,
so your sons will marry you.
With the joy of a bridegroom because of his bride,
so your God will rejoice because of you.

God answered the hurting by promising that instead of being called Abandoned and Deserted, they would be God’s Delight. They would be married again to their Land and their God. And the most beautiful promise of all was this:

You will be called by a new name,
which the Lord’s own mouth will determine.

At the Spiritual Formation retreat, we were each challenged to lay aside our goals, dreams and plans and to allow God to remake them and redirect us. For my prayer partner and I, this was especially poignant. Lay down our old dreams and hopes, and take on God’s? But what we wanted to do for God was not bad! In fact, we thought it was exactly what God asked. We set down a rock we had found on our morning walk, and picked up a stone with the NEW NAME on it.

It is a humbling thing to be brought to the place of “losing” everything, as the exiled Jewish people had experienced, only to be restored with God’s glory shining more glorious than before. They could not have known or predicted how God would do it. It was enough to know that God was at work. And that God would rejoice because of them.

In the almost three years since that retreat, I’ve had my “new name” rock with me on my desk at work, at home, in my pocket when I preach. It is present to remind me that I can keep going where God leads, as God leads. I don’t have to know all the specifics. I just need to know WHO leads me. There have been times that the journey has been disappointing, and other times where I knew in the depths of my heart that I had LISTENED and God was pleased. 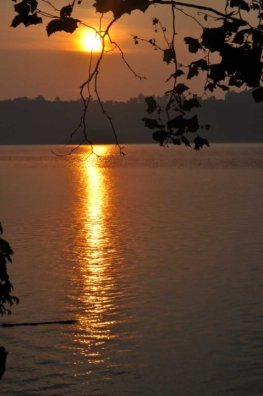 As the Spirit has led, I’ve been challenged, encouraged and filled with peace. I have been given that New Name which is God’s gift to me. Not the same as anyone else’s. I nodded in agreement as I read Paul’s words in I Corinthians 12:

Where you are today – I hope you sense that God has led you into the “activity of the Spirit” that makes God’s glory shine. As for me, I’m learning how to shine on! It is not easy. And doubts and questions will still come. But I know I’m on the right path, because God makes the way. It requires no wrestling, or worrying, just following!

Thanks be to God!