Reedy Girl and The Harpist are also novice fencers. Their coach, Olympic medalist Gitty Mohebban, was featured in the local paper.

Today was a tournament of sorts for her students, and Reedy Girl participated. While they have been keeping scores all along and the advanced kids were usually whupping our novice gals purty good, Miss Gitty has been encouraging… “GOOD! You scored two points on him!” and “Next time he drops his guard, get another point!” So they keep working away at it.

Reedy Girl’s bout is featured below… she lost 5-3 but showed herself to be, for a 12 and under, a good student.

FIRST – warm up. She just plops down on the floor and grabs her toe and casually stretches and warms up. (And I’m thinking the whole time, “ow ow ow ow ow!) It never seems to bother her!! Little Miss Flexible! 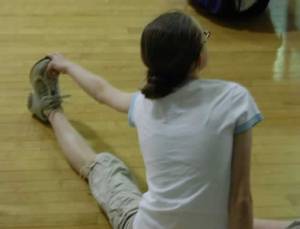 When they have electric bouts, they wear a special vest, called a “lame”. The jacket, foil and fencer are hooked up to a light and buzzer system to help judge the points. Miss Gitty is checking the connections in the “bodywire” in Reedy Girl’s vest before her bout. The foil is wired too with a switch in the point that records contacts or “hits” on the opponent. 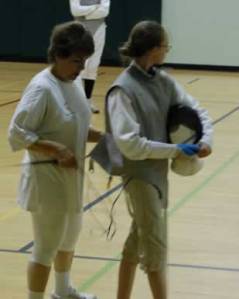 The fencers are connected to spoolers (on the floor – you can’t see them) which keeps them under tension all of the time. One of the hardest things to get used to is the constant pull. Reedy Girl says it feels like her butt’s on a string… which, technically, it is! 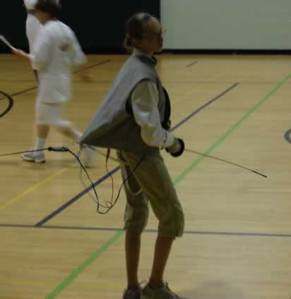 Both competitors are ready and take the en garde position. 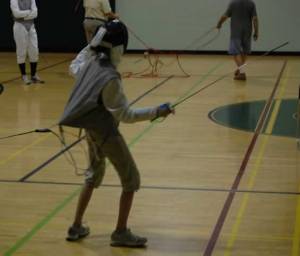 Point one from Reedy Girl! 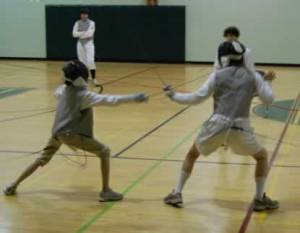 Her opponent scores back. 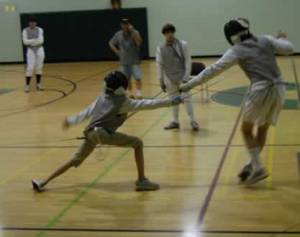 While she lost the bout, she was happy with her fencing. And then she got to settle in and watch some really advanced kids bout. 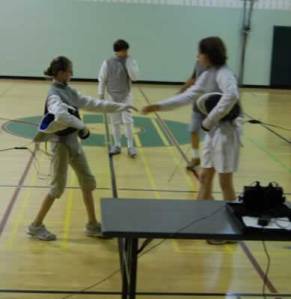 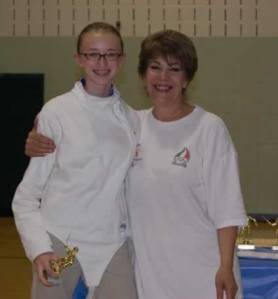 Now it’s time for a shower, and dinner and relaxing a little… Oh yeah… maybe some homework…